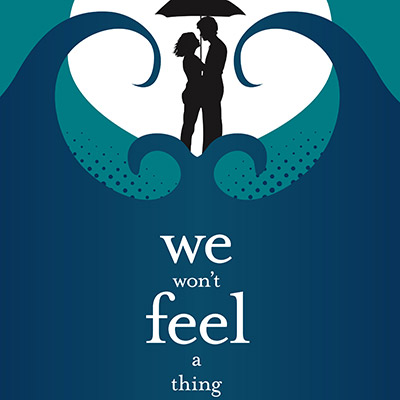 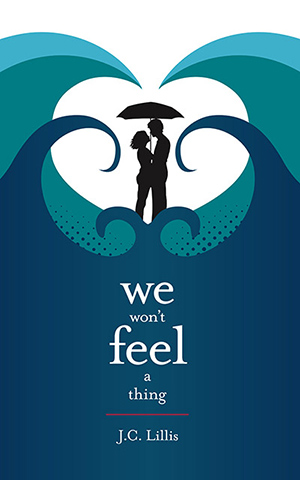 It’s my pleasure today to interview JC Lillis, author of ‘We Won’t Feel a Thing’.

I thoroughly enjoyed this book. It’s an adorable, romantic-fantasy-comedy story (a.k.a. it’s hard to describe, but very good) that put me in mind of Jasper Fforde doing romance, with hilarious-yet-vivid character depictions reminiscent of Terry Pratchett. If you haven’t yet, go pick up a copy

On with the questions!

Hey JC, thanks so much for joining us today!

Hi! Thanks for inviting me over; I promise to behave. Mostly.

I’m happy to have you here! So in We Won’t Feel a Thing, there are these two programs. Talk to us about the DERT program (love the name) and the WAVES program. Where did the ideas for those two programs come from?

Yeah, the two opposing therapeutic programs are the engine that drives the story, and they were both a lot of fun to create. The DERT program is all about radical, unrestrained honesty, and I got the idea from a segment I’d seen years ago on Dateline or 20/20, one of those shows. I can’t remember much about the specific approach being profiled, but I have a distinct memory of a guy sitting across from his wife and telling her “I hate your nose!” It left a big impression on me, and not just because I was watching with my parents and we were laughing our asses off. I couldn’t grasp how anyone would buy this approach as a legit path to relationship repair, and yet here were these seemingly normal people, insulting each other openly and hoping for change. I tucked that away and waited for the right story to come along.

The WAVES program is sort of the anti-DERT—a neat, efficient, unemotional way to snip out unwanted feelings—and it was inspired by a comment a scientist friend of mine made to another friend of ours. She was going through a rough patch, and he was like, “You know, your life would be so much easier if you learned to engineer your emotions.” We were all outraged at the time, but it got me thinking about what an actual “emotional engineering” program would look like, and that’s how the David Kerning character and the WAVES program started to evolve. It seemed natural to set up these two programs in opposition to each other—there are a lot of “couples” in this book who are two sides of a coin, and that’s how I view the two program leaders. WWFaT is sprinkled with these fantastical, larger-than-life elements, so it felt logical to set them up as lifelong nemeses, in almost a superhero/supervillain kind of way (though both of them would argue that he, in fact, is the hero).

Writers often joke about the random things they end up needing to research during the creation of a story. What kind of research did you have to do for this book? Anything odd come up that you hadn’t expected needing to investigate?

Oh yeah. It’s a weird little book. Some nights Google was just like, “…really?” Taxidermy knives, truth serums, aphrodisiacs, nasal cannula, dream telepathy, that town in Pennsylvania that’s been burning underground since the sixties—I’m almost afraid to list it all. I promise it all hangs together!

Oh, it totally does. Now about the symbolism in this story. Symbolism plays such a strong role in the book, and the word-play is awesome (Martinet College? Fabulous). Of the symbols throughout the story, was there one that held special significance for you?

Thanks! Yeah, I’m such a dork; I love wordplay. Mostly everyone’s name means something. Like with David Kerning—in typography, kerning is adjusting the space between characters, which is pretty much what he promises to do with Rachel and Riley (*pauses while everyone groans*). I like slipping in little puns and jokes like that. If you can’t have nerdy fun while you’re writing, why do it?

I think my favorite symbol-type thing in WWFaT is Rachel and Riley’s clock with the mermaid/merman figures, Bob and Athena. I got really attached to them—I mean, I’m obsessed with mermaids, so that helped—and I feel like they became characters in their own right. Not to get all over-explainy and “this meant that,” but I was very deliberate about what those figures on the clock meant to Rachel and Riley at different points in the story. When they’re happy in their universe of two, they see themselves in the figures, but the more problematic their relationship becomes, the more sinister Bob and Athena seem. (Side note: I have this picture of Bob and Athena in my head, but I don’t have the drawing skills to make it happen. Artsy WWFaT readers: if you ever want to take a crack at it, I’ll pay you in mac & cheese.)

I love the integration of music references in this book. Did you make up all the names of the artists and songs in this book, or did you sprinkle in a few real-life bands you enjoy?

Hee! I had so much fun with that part. My husband and I make up random band names all the time, so a few of them came directly from our unofficial archive. The band Rachel listens to throughout the book, Thirsty Herd—we thought that one up a few years ago while driving by a cow pasture in Pennsylvania on a hot day. I was just waiting for a chance to use it.

Some of the other songs and bands I made up myself, and some I created by hitting refresh on a band name generator until something clicked. One of my beta readers came up with the song title “Pickled Heart (Jar on a Shelf),” which was awesome in an appropriately Meat Loafy way. I think the only two actual bands I mention are the Pretenders and Fleetwood Mac, because they’re timeless and will, in my opinion, never not be cool.

As a big (read: basically-grafted-to-my-headphones) music listener while writing, I’m curious: do you listen to music while writing? Why or why not? And if so, what did you find yourself listening to while writing this story?

No! Oh man, I wish I could. I LOVE music, but for me it’s a total concentration killer. I can’t write at all if music’s anywhere within earshot, though I do obsess over book playlists. Sometimes before a writing session starts, I’ll gear up by putting on a playlist or listening to a song with a special connection to the scene. Like in WWFaT, there’s a whole chapter structured around a drippy pop ballad that calls up specific memories for Rachel and Riley—it’s called “Bleed My Love,” but it’s inspired by Leona Lewis’s “Bleeding Love.” I played that song again and again while I was writing the scene and used it to guide my descriptions of the vocals and music. (You can actually sing some of the “Bleed My Love” lyrics to the tune of “Bleeding Love.” It was cool, getting to write that; I have a soft spot for melodramatic pop songs, so I got to call on my inner Diane Warren.)

If I could eat Indian food every day for the rest of my life, I’d be happy. Vegetable korma, if a buffet is out of the question.

Cat person, except I can’t have one because I’m allergic. I’m sure there’s a metaphor in there somewhere.

If you’d asked me a month ago I would’ve said Game of Thrones, but this season’s made me super ragey, so just out of spite I’ll say Mad Men instead.

Here’s one from Louis C.K. that I’d like tattooed on the back of my hand: “If you want 100 percent of people to like your material, you really have mental problems.” That’s a pretty stark way to put it, but I think it’s so important to remember: first, that it’s impossible to write something EVERYONE will love, and second, that this isn’t even an ideal you should be striving for. If you’re sitting there with nine thousand potential critiques running through your head as you write, and you’re trying to knock down every one like it’s a carnival game, you’re going to end up with the flattest, dullest story and characters you can imagine. I catch myself doing that sometimes, and it’s always a disaster. Write the story you want to write. It’s okay—and sometimes even awesome—if it pisses some people off.

I’m into dollhouses and miniatures, which is why it was such a thrill to do the stop-motion book trailer for WWFaT (Skye’s note: the trailer is adorable. You should go watch it). I geeked out over that set for months. The fact that I had a legit reason to make a hardwood floor out of Popsicle sticks made me ridiculously happy.

And last but not least… what’s next? Have any new stories in the works that you’d care to share a bit about?

I’m taking a short breather for now, but I’ve got my next idea in the pipeline all ready to go. It’s another YA, and it’s mostly about female friendship and professional envy, but it could turn into a romance depending on where the characters want to go. It’s about the rivalry and friendship between these two highly competitive up-and-coming pop stars; sort of like Amadeus with young female singer-songwriters. (It’s cool because Brandon and Abel, the main couple from my first novel, are going to be side characters. The book is set ten years after How to Repair a Mechanical Heart, so I’m really looking forward to catching up with them and finding out what happened with their relationship. I missed those guys!)

Thanks so much for having me over; it was an honor to be your guest.

My pleasure! Thank you for joining us!

If you’d like to pick up a copy of JC’s books, just check out the links below. Like I said above, ‘We Won’t Feel a Thing’ is a great read — and I simply must put in a plug for her other novel, ‘How to Repair a Mechanical Heart’, too. It has a love story that has you rooting for the relationship from the very beginning, with characters that are memorable, relatable and endearing as all get out.

Get ‘We Won’t Feel a Thing’ 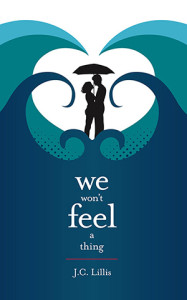 Their situation’s. . .complicated. And their timing couldn’t be worse—in just one month, he leaves for California and she starts college in New York. The absolute last thing they need is a reckless secret-love confession mucking up their perfect plans.

And sometimes when you fight love—love fights back.

Get ‘How to Repair a Mechanical Heart’ 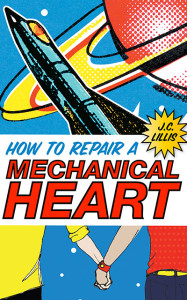 Alright, that’s it for today. I hope you enjoyed the interview! Go grab yourself a copy of ‘We Won’t Feel a Thing’

and ‘How to Repair a Mechanical Heart’